Many moons ago, in 2011, I had a brainstorm. What if hard-boiled cowboy author Cormac McCarthy wrote Yelp reviews?

If you’re not familiar with Cormac McCarthy, he wrote such bleak apocalyptic western novels as No Country for Old Men and The Road. His style is dark, his vocabulary is impossibly dense, and he has no regard for grammar rules or the emotional wellbeing of his readers.

So, perfect for Yelp, right? In the fall of 2011 I began posting Yelp reviews on a Tumblr entitled Yelping With Cormac. Aside from rave reviews from my friends, I didn’t get much feedback from the project for the first month or so. Then I noticed my project popping up on some San Francisco-based blogs. Then some bigger blogs—Daring Fireball, Boing Boing (remember blogs?) And then a friend emailed me one morning and said, “Evan, you’re in the New Yorker!”

It was an exciting few months. I kept writing, but now I had *fans*. Each post would be followed by reblogs, comments, and other digital love. I got a call from NPR’s All Things Considered (I can say I was considered by All Things Considered). I was written up in newspapers and magazines. GQ called the project one of the funniest things on the internet.

Writing the project was a thrill. New review ideas would come to me almost everyday—what about a gutshot cowboy hiding in a mall bathroom? A man so traumatized from eating at Taco Bell that he loses his mind. I wrote and I wrote. And I methodically read through Cormac McCarthy’s apocalyptic oeuvre, keeping a list of his most obscure vocab: brockle-faced, anchorite, travois.

But then two things happened. First, Cormac McCarthy broke me. I was reading Blood Meridian, perhaps his darkest work, and I overdosed. It was just too bleak, too hopeless. It was affecting my mood.

I was becoming a cynical cowboy, the light behind my eyes fading to an ember in a godforsaken camp, no living soul within miles and the only company the lacerating north wind and the yammering of coy-dogs.

OK, I’m a little rusty on my Cormac voice. [Re-reading some of these reviews I have to say, I have no idea where the words came from. I cannot recreate it.]

And then, I ran out of ideas. The inspiration turned off like a spigot. I wrote the Yelpers of Lordsburg, a three-part Yelp review (part 1, part 2, part 3) about a clan of Yelpers who destroy a small town, and that was pretty much it. I no longer heard Cormac’s voice. It was over.

My internet fans and my friends yammered for more, but I had nothing left to give.

I’ve since wondered on this moment. Did I make a mistake? Should I have powered through? I’ve since read much on creativity (see Julia Cameron and Austin Kleon) and they will tell you the artist must keep working. Art is work, art is process, sometimes art is a slog. But I really felt it was a dead horse, so to speak. So I moved on to other projects, none of which reached the peak that was Yelping with Cormac.

A year later a literary agent wrote me an email. Would I like to talk about turning Yelping with Cormac into a book? I was petrified. What do I say to a literary agent? I’m not an *author*. I procrastinated for several months. Then, overcoming my nerves, I called her. It was a fascinating conversation—she told me about other people who had turned Tumblrs into coffee table books. But critically, she wanted me to write another 40 reviews. I could not. I ended the call thoroughly deflated.

Then, some months later, something amazing happened. Another email arrived, this time from The Best American Nonrequired Reading. If you’re not familiar, this particular series from The Best American is curated by high school students and was originally edited by author Dave Eggers (a personal hero of mine.) It typically has a hodge podge of articles, short stories, comics. I own several editions as I love the series.

Would I like to be in the Best American Nonrequired Reading? Yes, yes I would. Is your legal name E.D.W. Lynch? Yes, actually it is. Are there any brands or real persons named in your piece. Oh, yes. Here is a check for $500. Oh, you’ll pay me? Neat.

The new peak of Yelp mountain became The Best American Nonrequired Reading 2013, where you will find five of my reviews. 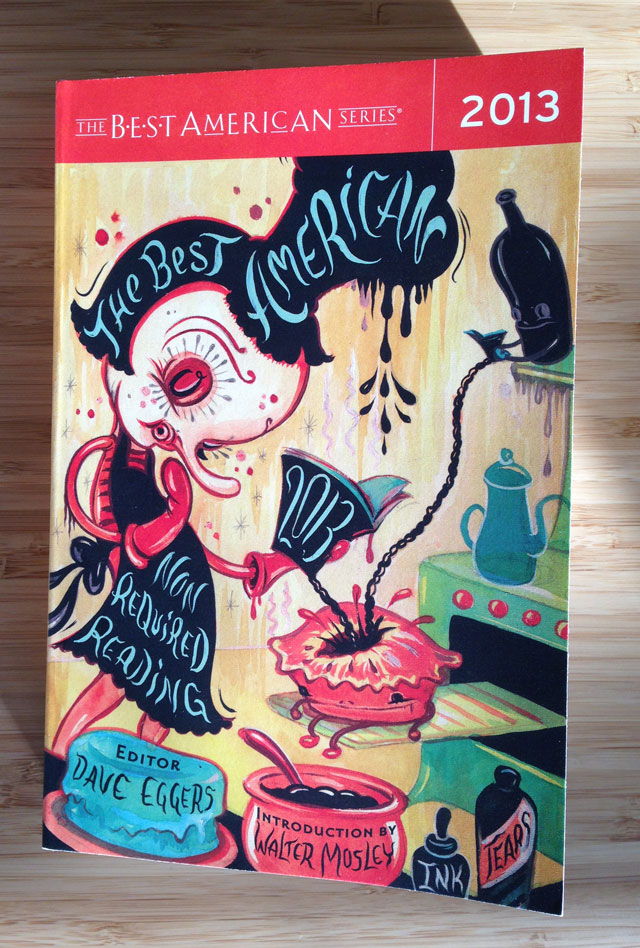 And then, for the most part, that was the end of my cowboy yelp story.

Until last winter when I received the most unexpected email. Jacob Yeates, an artist and illustrator from Minneapolis, wrote me to tell me about a side project he was working on. Much to my astonishment and glee, he was illustrating Yelping with Cormac.

My artistic dream has long been to collaborate with talented, motivated artists. I have found though, that those moments of collaboration are rare indeed. Imagine my delight when I found myself collaborating with a gen-u-ine illustrator who I had never met.

I love Jacob’s style. I find his work beautiful, bleak, stark…rather like the prose of Cormac McCarthy. It’s really a perfect fit.

Jacob and I corresponded briefly and then I am ashamed to say I allowed the correspondence to go quiet. But I’ve finally gotten around to telling this tale. And so, with Jacob’s permission, a few of his illustrations. Thank you, Jacob. 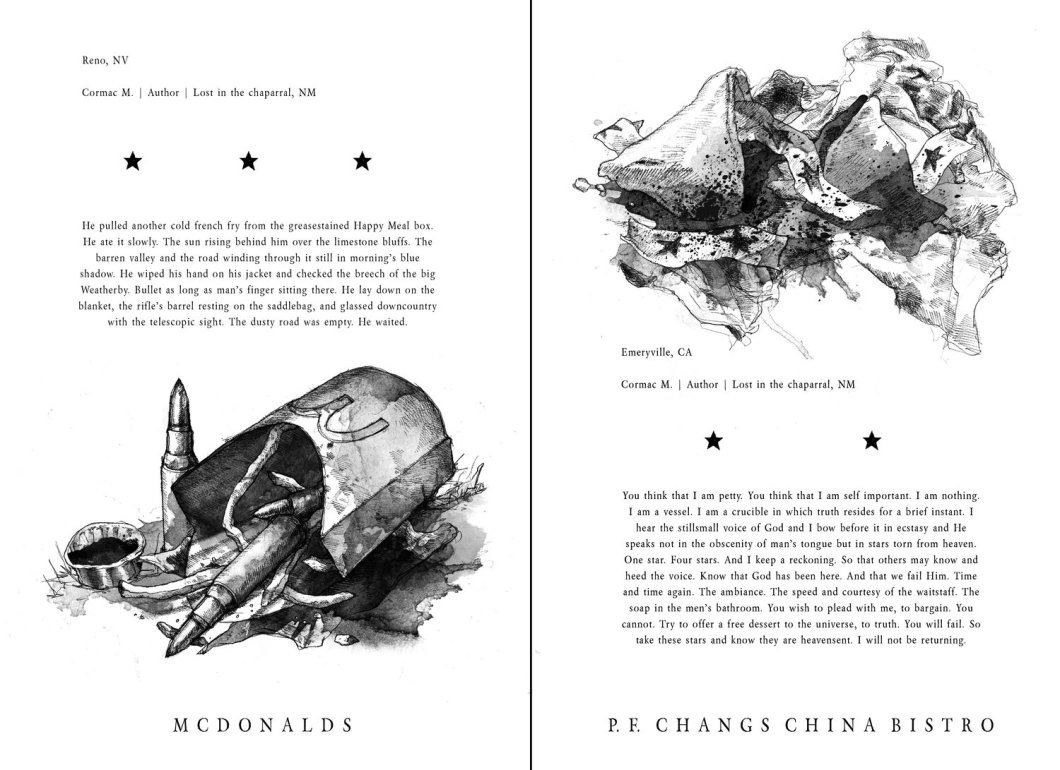 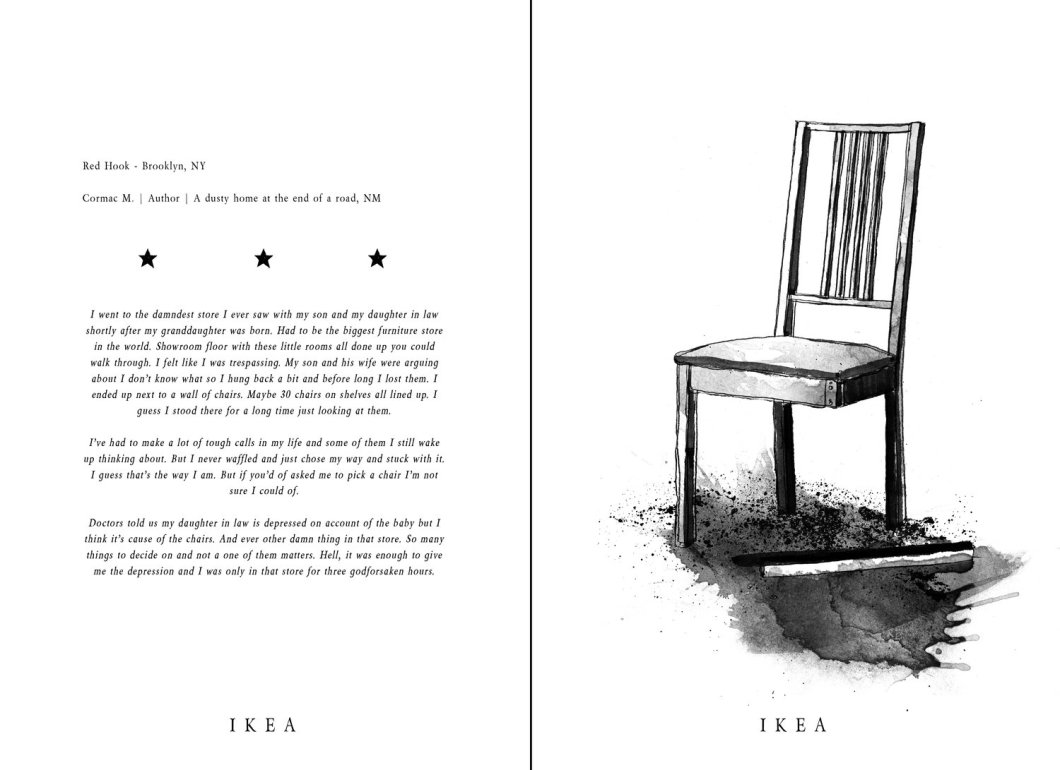 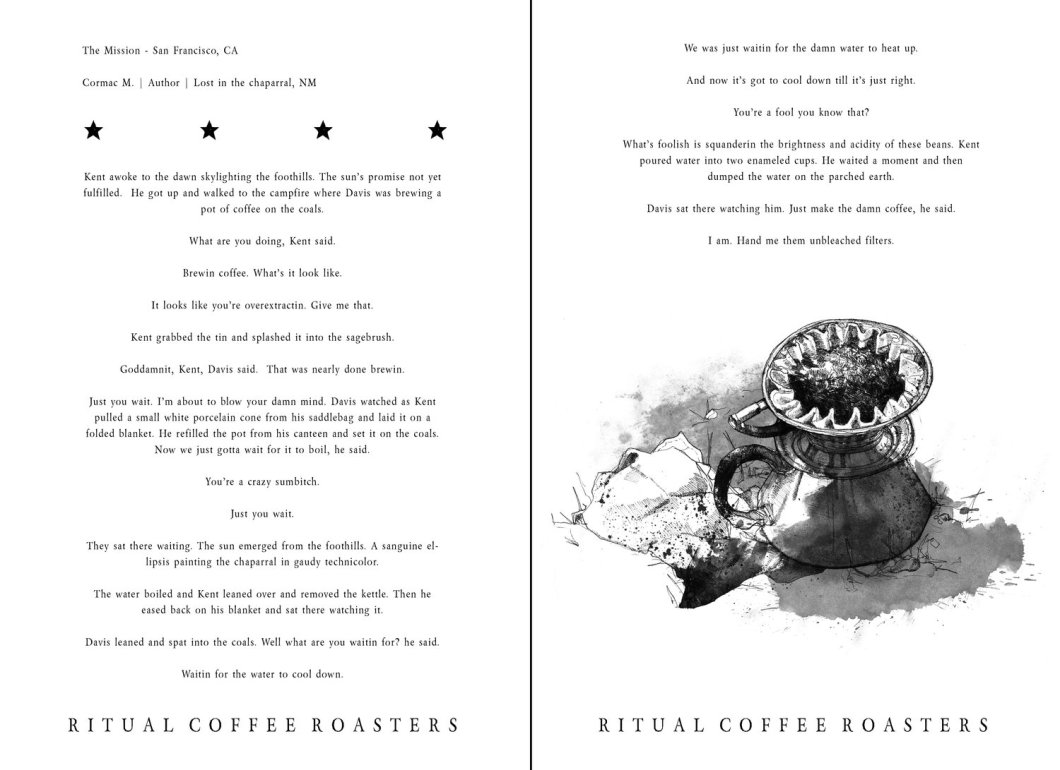