All Aboard the Euthymia Train 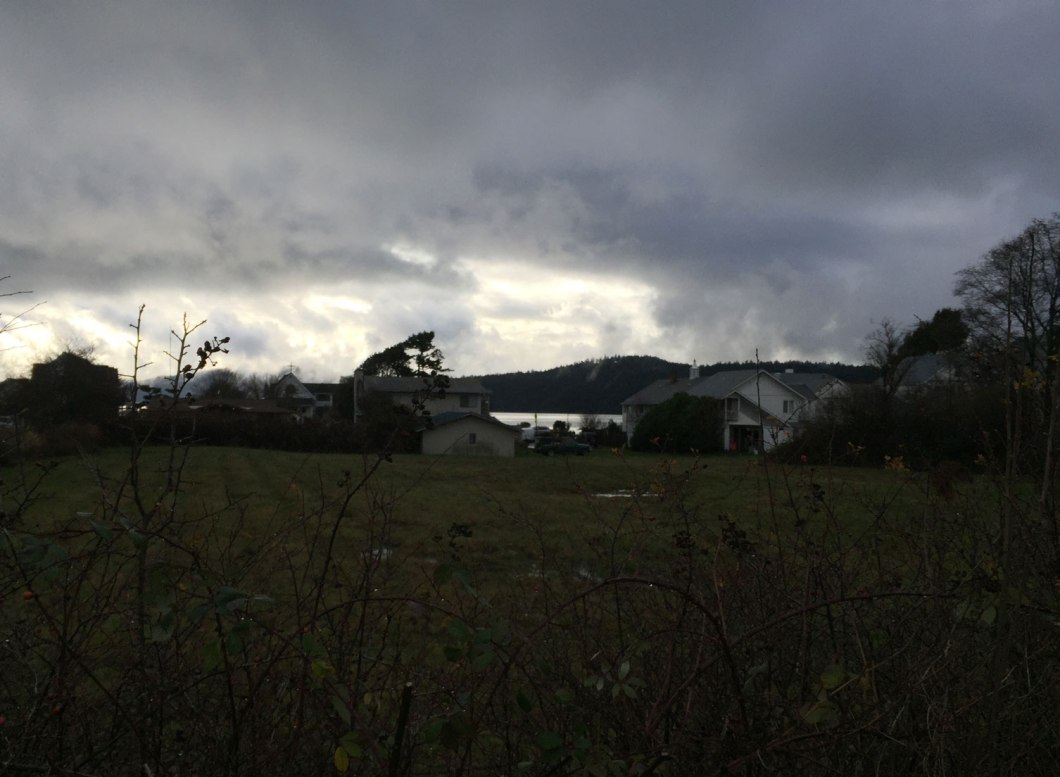 I’m entering my fourth winter on Orcas Island. Summer on Orcas is something near perfection. It’s sunny till 10pm, warm and breezy but rarely hot. The all-consuming humidity of much of the rest of the country does not exist here. If I was a costly aquarium pet, like a rare lizard, summer Orcas would neatly describe my ideal conditions.

Winter, on the other hand, is a formidable thing. Even longtime islanders talk about it with foreboding. The really clever ones leave for long spells to places with sun: Arizona, Mexico, Thailand. The island is beset by long drizzly spells. Sometimes we don’t see the sun for weeks. It gets dark at 4pm. And most of the young beautiful seasonal people leave, leaving us older, wizened, desperate year-rounders to fend for ourselves.

And so last winter I said to myself, no, really, I am leaving this winter. I constructed a whole plan, a Hail Mary move to Chicago, borrow money, crack open my 401K, anything to get out.

And then there came a hard moment in late fall that I realized I simply could not move. I didn’t have the money, or energy, or self-belief. I was exhausted, anxious, desperate. I just simply didn’t have the resources.

And so, I began to investigate. Moving is hard but it shouldn’t be impossible. Was I such a failure at life that I simply could not get off this island? Or was there another answer?

I was raised in a culture that said that some people are just weak and fall into drugs depression, crime, and other misfortunes. But in my research I began to hear another story. That we turn to drugs and depression and crime when we are not thriving. That human beings are quite astute at self-medicating and numbing unbearable pain. That the body does not distinguish between emotional and physical traumas when it fires up its defenses.

I had a kind of thunderclap A-ha moment that winter. I’ve known that I’ve struggled with depression and anxiety in my life. But what became clear to me that winter was that I have struggled with some form of depression or anxiety for my entire life. It fit like the final puzzle piece in a life I had found incomprehensible.

According to family lore I was an imaginative, generally happy child. That being said I have early childhood memories of powerful anxiety about home life, school, and socializing. By adolescence these feelings had greatly intensified and I recall almost unbearable fits of rage, loneliness, and self-loathing. I was first diagnosed with depression when I was 17. I was a clever student though, and maintained straight A’s throughout high school.

I rode academic achievement all the way to an elite program at Carnegie Mellon, where I fizzled, stuttered, and came to a halt. Throughout my early adulthood all expectations were that I would become a person of some significance in whatever field I chose. Except I never finished college, never chose a field, never found a partner, and woke up at 37 on a remote island in northern Washington with no money and no clear path forward.

Until recently I thought I was the world’s biggest screw-up. What other conclusion could I make? What are we to make of someone who fails to thrive? Again, the story I was raised with was that people who fall into mental illness or misfortune are flawed human beings.

I can tell you as someone who lives with mental illness that believing you are a flawed human being causes more mental illness. It causes a downward spiral that feels as irresistible as continental drift, with all the weight of Truth to it. I’ve learned that the ego in depression loves this and runs with it. I told myself all sorts of reasons why I was a loser while many of my friends were partnering up, buying homes, and making babies. The ego in depression becomes a tyrant, lashing the rest of your person with vitriol, inflexible laws, repetitive and self-destructive behaviors.

And so last winter I considered the story my ego was telling me, that I have a fatal flaw and am doomed to a life of regret, missed chances, and suffering.

The thing is, I have been cultivating another story during my time here, which began not with me, but with the people around me. Because I’m not nearly so cruel to others as I am to myself. And so with other people I was building a new story: That we are all basically doing our best. That when we act out, or when we suffer in depression or addiction or otherwise, we are responding quite reasonably to a life we find unreasonable and inhumane. And we cannot do otherwise. We are highly attuned, social, and if something is wrong in our world, we will feel it. And try as we might, we will not be able to hide it.

And so in the darkest months of Orcas winter I found a therapist who would take my broke-ass state insurance, and I came in, and I told him my story, and took some little tests, and he said: You have dysthymia and anxiety.

Anxiety you have probably heard of. It is the single most prevalent mental disorder in the U.S.

I had never heard of dysthymia. Dysthymia is a mild or moderate depression that won’t go away. It’s not a David Foster Wallace depression that leaves you catatonic on a couch. It’s not the roller coaster of bi-polar depression. It’s a long bummer. A heavy but bearable weight that settles over you and never leaves.

I thought, yeah, that sounds about right. And so then I went to Doctor Google and stumbled across this related term: Euthymia. Euthymia is the medical term for pretty alright. It is used to describe the state between a manic phase and a depressive phase in bi-polar depression. It’s basically a neutral, everything is alright state of mind.

I wanted me some of that. So when my therapist asked me what my treatment goals were, I said: Euthymia.

Fast forward to this winter and I can say, much to my wonderment, that I feel pretty alright. I feel euthymic much of the time. I rarely jump for joy, but my world is no longer permanently clouded by depression and anxiety. And in the past year I have felt, for the first time in my life, strange new feelings like ecstatic joy and utter tranquility.

So hop on board the euthymia train, friends, I want to take you on a journey. More to come.

If you are currently in distress, please contact the National Suicide Prevention Lifeline.

Comedians have become unlikely advocates for mental health. I’ve been loving The Hilarious World of Depression

Wonderful, even inspiring conversations on depression over at On Being

Johann Hari: This Could Be Why You’re Depressed

How to Change Your Mind by Michael Pollan was the inspiration for much of my healing work. The chapter on depression was particularly astonishing to me.