Orcas Power & Light is the community-owned power utility for Orcas Island (and neighboring islands.) It’s one of the very cool things about this island, but today I use it as a metaphor for another very cool thing.

This morning I walked down to Waterfront Park, a windblown lawn on the East Sound, to join about 200 island neighbors for the Women’s March. I am struck in these community gatherings by the energy and enthusiasm of Orcas Islanders. We are small but powerful.

All generations were in attendance, from grandmothers down to babies (and pregnant moms—hi Jess!) The feel was positive, communal, strong. I noted several women who naturally led the proceedings: A feisty middle-aged woman with a commanding voice who started many of the chants and cheers. A 20something farmer who spoke about her experience at last year’s Washington march. Another woman, probably about my age, who runs the Orcas Island Farmers Market and started us off in the march. 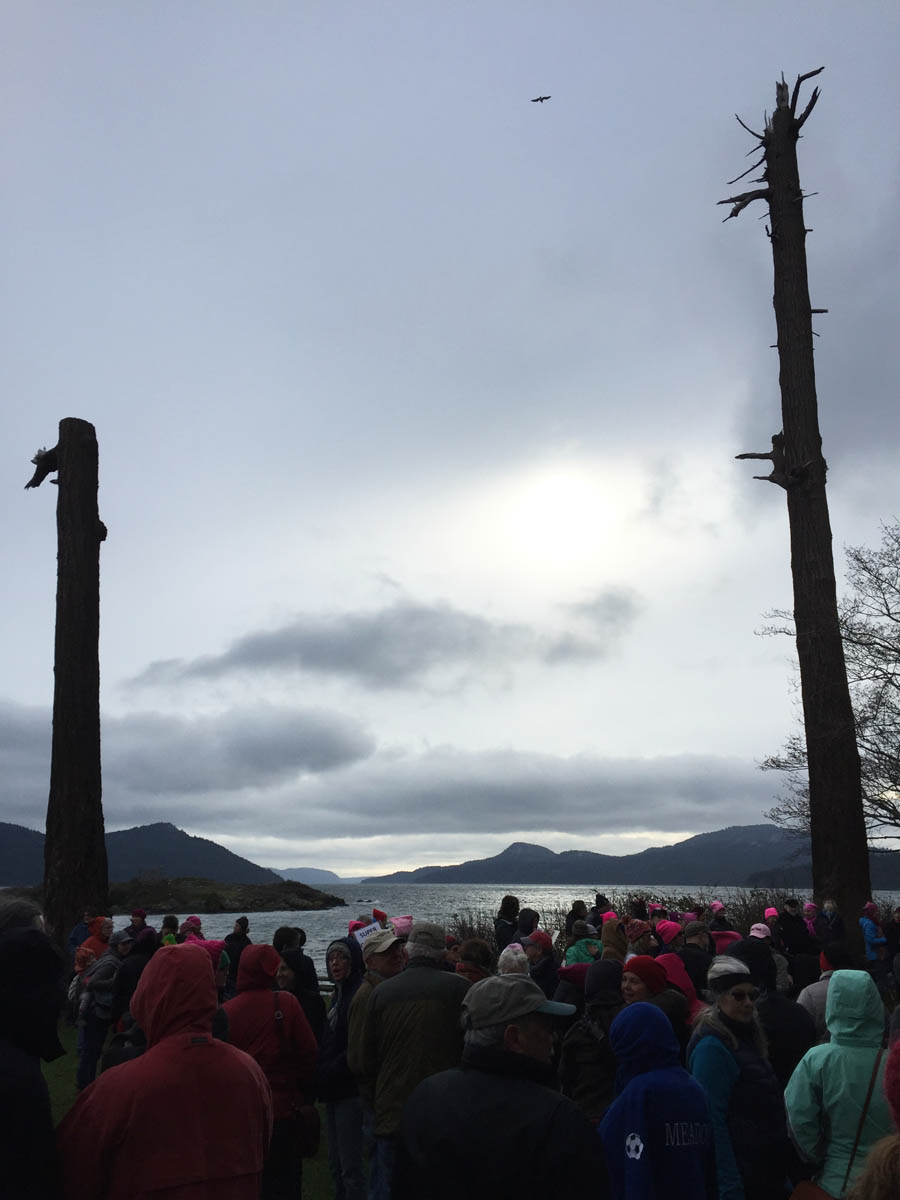 We marched from the park to the Village Green, not more than half a mile, through our little town. Shop owners waved at us from store fronts. The local food Co-Op staff was all outside to watch. Some tourists took photos of us and then joined in. We spilled into the street but cars were few and far between and the motorists politely waited, or waved. The Sheriff’s Department probably knew about the event but they were nowhere in sight.

At the end of the march we gathered in the Village Green and about eight women spoke in turn from the soapbox of a picnic table. I was struck by the courage of each speaker, to hop up on that table and talk to a sizeable crowd. They spoke about other marches around the world, about the importance of children, about getting involved in politics… The final speaker was a woman named Trinity, a relative newcomer to Orcas, who sang a song about the original African mother from which we all descend. Though the song was new to us (as Trinity had written it herself), we spontaneously started singing along once the chorus repeated. 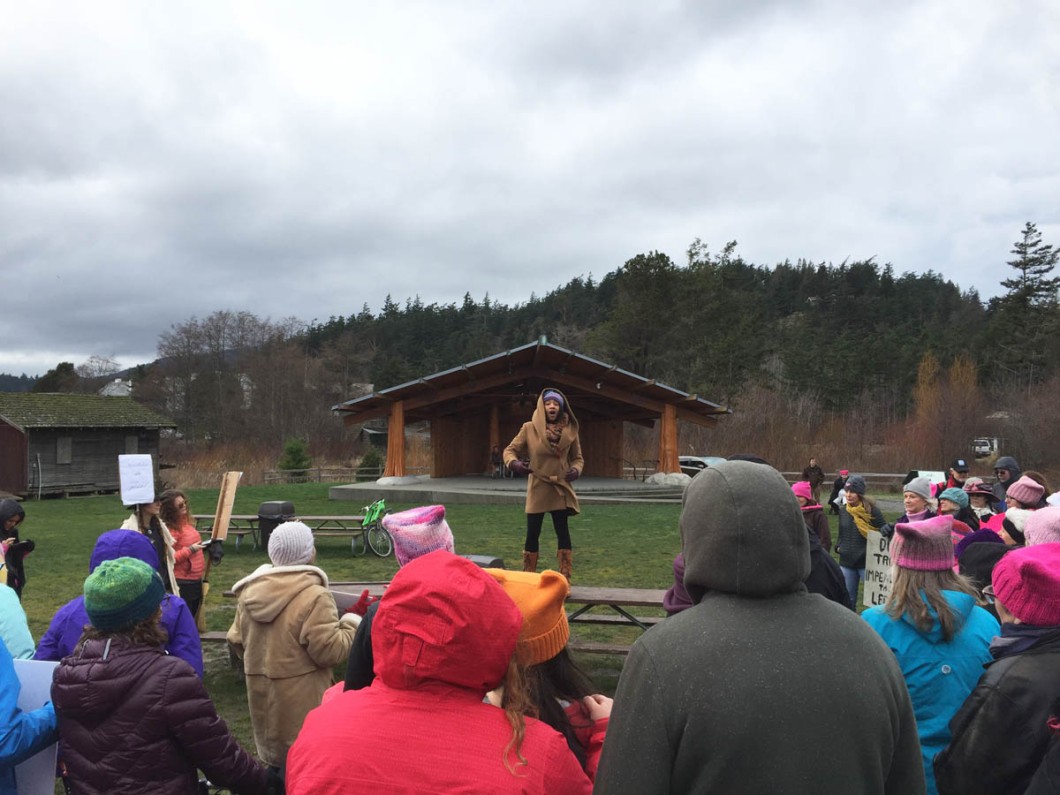 As I walked back to my home (I now live in town, not far from the Green), I had a thought of what I would have said, had I the temerity to get on that picnic table. I would have read from my favorite Martin Luther King, Jr. speech. I found it last year as I prepared for the Women’s March in Seattle. It is from the tail end of his 1967 speech Where Do We Go From Here (transcript, video.) A passage about the power of love:

And I say to you, I have also decided to stick with love, for I know that love is ultimately the only answer to mankind’s problems. (Yes) And I’m going to talk about it everywhere I go. I know it isn’t popular to talk about it in some circles today. (No) And I’m not talking about emotional bosh when I talk about love; I’m talking about a strong, demanding love. (Yes) For I have seen too much hate. (Yes) I’ve seen too much hate on the faces of sheriffs in the South. (Yeah) I’ve seen hate on the faces of too many Klansmen and too many White Citizens Councilors in the South to want to hate, myself, because every time I see it, I know that it does something to their faces and their personalities, and I say to myself that hate is too great a burden to bear. (Yes, That’s right) I have decided to love. [applause] If you are seeking the highest good, I think you can find it through love. And the beautiful thing is that we aren’t moving wrong when we do it, because John was right, God is love. (Yes) He who hates does not know God, but he who loves has the key that unlocks the door to the meaning of ultimate reality.

And so I say to you today, my friends, that you may be able to speak with the tongues of men and angels (All right); you may have the eloquence of articulate speech; but if you have not love, it means nothing. (That’s right) Yes, you may have the gift of prophecy; you may have the gift of scientific prediction (Yes sir) and understand the behavior of molecules (All right); you may break into the storehouse of nature (Yes sir) and bring forth many new insights; yes, you may ascend to the heights of academic achievement (Yes sir) so that you have all knowledge (Yes sir, Yes); and you may boast of your great institutions of learning and the boundless extent of your degrees; but if you have not love, all of these mean absolutely nothing. (Yes) You may even give your goods to feed the poor (Yes sir); you may bestow great gifts to charity (Speak); and you may tower high in philanthropy; but if you have not love, your charity means nothing. (Yes sir) You may even give your body to be burned and die the death of a martyr, and your spilt blood may be a symbol of honor for generations yet unborn, and thousands may praise you as one of history’s greatest heroes; but if you have not love (Yes, All right), your blood was spilt in vain. What I’m trying to get you to see this morning is that a man may be self-centered in his self-denial and self-righteous in his self-sacrifice. His generosity may feed his ego, and his piety may feed his pride. (Speak) So without love, benevolence becomes egotism, and martyrdom becomes spiritual pride. 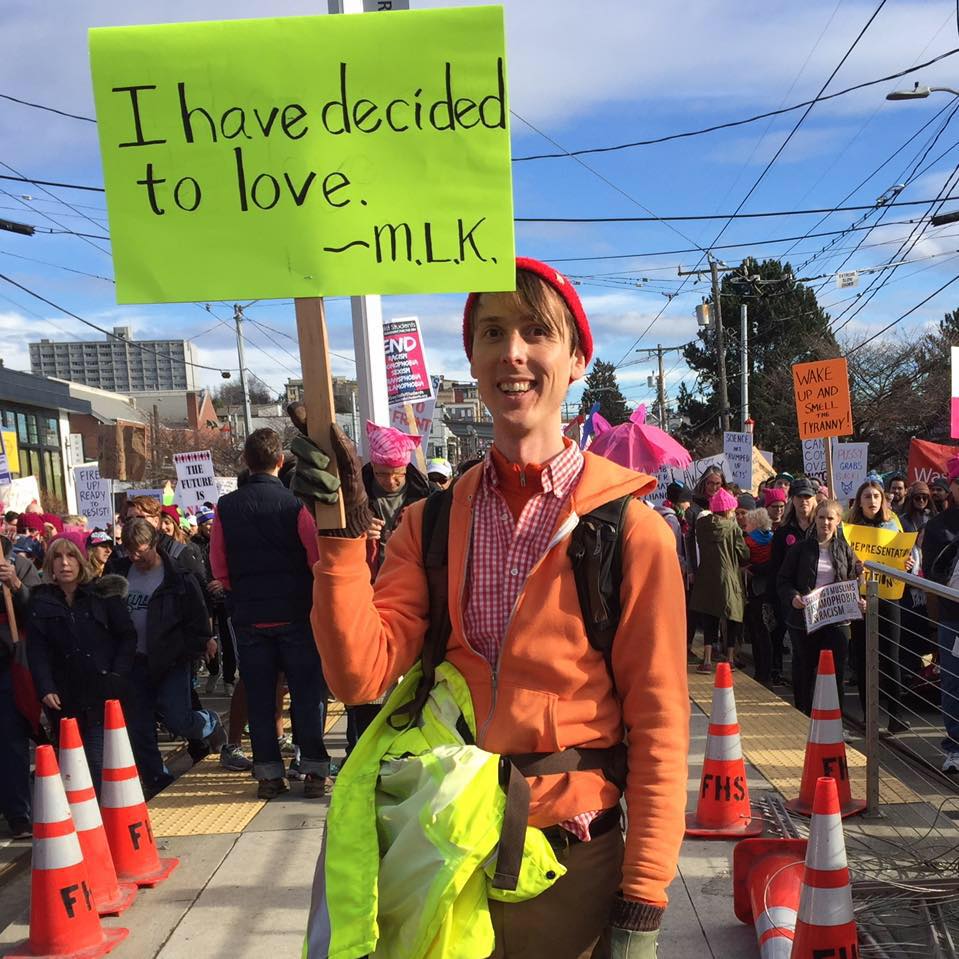