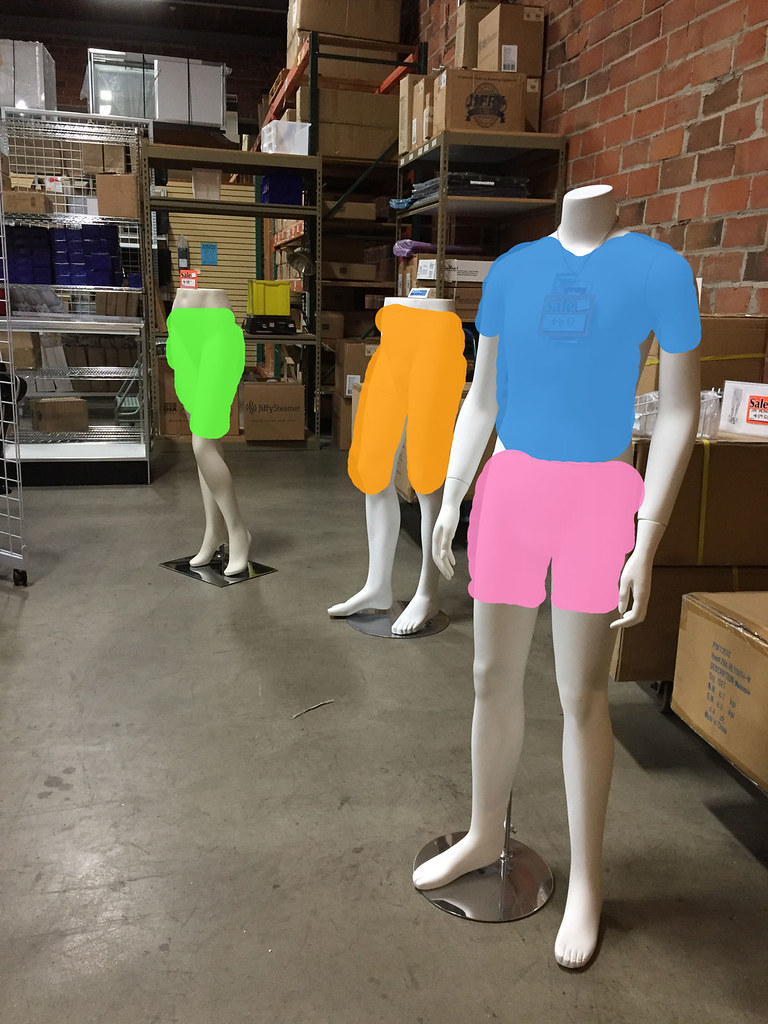 *As a strange side note, photos of mannequins seem to trigger nudity blockers on WordPress (and likely Facebook too.) I tried painting clothes on them. Still getting blocked. So I’ve had to upload to Flickr, which apparently permits naked mannequins. I submit to our robot overlords.

Ever since I was a kid I have been freaked out by mannequins. I think it’s the Uncanny Valley effect, in that mannequins are lifelike…ish. Their bodies are fairly accurate, but they have smooth, featureless faces or garish dead eyes with 80s glam makeup.

And yet on Tuesday, when I walked into a store fixtures warehouse in Seattle, I found myself overjoyed to find a “pants mannequin.” Disembodied lady legs attached to a metal base. Like the lower half of a Greek statue.

I need a mannequin for my apparel project. I’ve spent the past month designing my first pair of leggings. My first design will be based on the Nebraska dazzle camouflage pattern (as seen on the Nebraska bag). I chose to start with Nebraska because the pattern is repeating and therefore fairly straightforward to adapt to apparel (from the very simple tote bag pattern.)

But I am much more interested in the asymmetrical modern art look of more complex dazzle camouflage. This will be much easier to design in three dimensions, rather than on a two-dimensional clothing pattern. Hence the mannequin. I’ll buy white leggings and design directly on the mannequin (you’re going to read the word “mannequin” a lot in this post—there aren’t many synonyms. See also “dummy” and “dress form.”)

The journey to Seattle’s SODO warehouse district started with a bit of mannequin research back on Orcas Island. I searched for tips on buying mannequins, which led me to companies like Mannequin Madness. They have a mannequin blog which can lead you down all sorts of rabbit holes.

I learned, that like cars, or task chairs, there are grades of quality. You can buy a cheap mannequin for about $100 dollars, or you can spend over $1,000 on a designer dummy. At the very pinnacle are companies like Rootstein—the pioneer of high end, lifelike mannequins.

Rootsteins are so exclusive that the company does not even mention prices, nor can the mannequins be bought online (only through the company’s “Agents.”)

A curious thing about mannequins—they are frequently referred to in the industry with gendered pronouns. So:

She has bendable arms that you can pose in different ways. She may be futuristic looking, but she still likes to be fashionable which is why she has pierced ears, so she can wear earrings.

He has magnetic arm fittings which makes him easy to dress.

A thousand dollar bespoke mannequin (or even a $400 Chinese knockoff) is out of my price range so I began looking elsewhere. You can buy a mannequin on Craigslist, but I was not enthusiastic about buying a used dummy from a stranger. The pictures were oftentimes unsettling—mannequins posed in garages, in front of storage units, leaned against a Jeep. The sellers were oftentimes men, with man names like Mark, or Mikey: 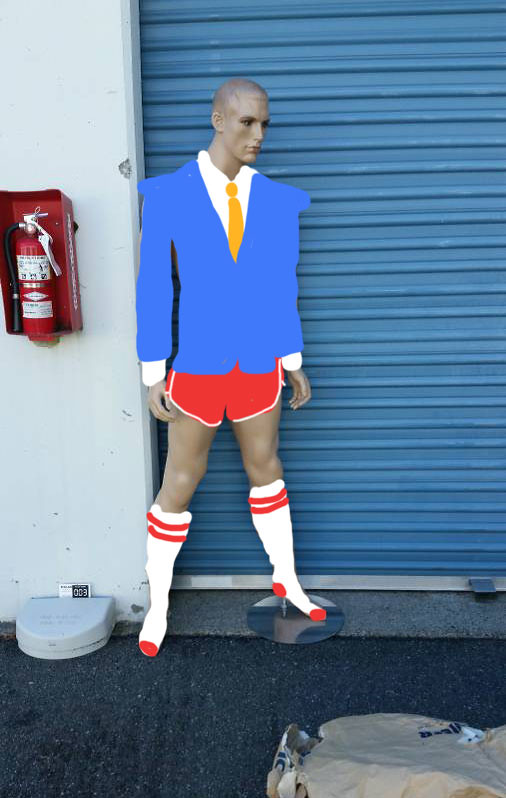 I don’t know why I found it unsettling. But I did.

So I was happy when I ventured into the Grand + Benedicts store in SODO and found a well-lit warehouse staffed by nice people. I asked about mannequins and a worker led me to a back room. There, next to a man mannequin with its generic genital lump was a female pants mannequin standing contro posto, daintily abbreviated right above the belly button. I was saved—from Craigslist, from further wanderings in Seattle suburbs.

The first thing I asked was—is that a youth mannequin? Because, and this is really part of much bigger conversation, the mannequin was tiny. Tall but impossibly narrow-hipped and –waisted. I looked at the mannequin and thought—I don’t know a single person who looks like this. And then I thought…Ohh! And for a magical instant I was transported from my man body and saw a teensy tiny window into what it is to be a woman. I realized the mannequin is but one facet of a giant machine that manipulates our perception of how women’s bodies are supposed to look.

This matters to me because I am designing for women who actually exist, friends and neighbors of all shapes and sizes. And this is one of the things I really like about leggings. They conform to the body’s shape, not the other way around. I like that lots of different types of people wear them for lots of different reasons. I like that leggings are fun, expressive, and celebrate the human form.

My leggings will be available sizes XS to XL. I’m hoping that will cover most of my customers. I’m also working on kid leggings, for that matter. *I would love to make man leggings but this will require much more…legwork.

So stay tuned on the leggings front. I just received my second leggings prototype. It’s finally ready. I will be in the leggings business in February.

Meanwhile there’s a mannequin standing silently, about 10 feet from me, as I write this. She still triggers a freakout response when I see a human figure out of the corner of my eye. I’ve got her dressed in a toga type thing (really, a bed sheet) so the neighbors don’t gossip too much. It is a small island, after all.