UPDATE 7/2/2019. Some additional thoughts on this story, see below.

In 1988 my family moved from San Francisco to York Harbor, a small coastal town in Maine. I was an intensely shy six-year-old with a blond bowl cut and Osh Kosh overalls.

I recall hating school. I was terrified. I felt very exposed, being the one new kid in the small town school. Recess was the worst. That was my daily game of survival. The bullies stalked me on the playground. I was small for my age, very introverted, just waiting to get pushed into the dirt.

So I would hide next to the duty teacher. There was one in particular who was nice. She let me stay near her all recess, she wouldn’t even shoo me away to “go play.” I called her my fairy princess. There were a handful of adults in my life who got me and she was one of them.

But one day she wasn’t on duty. There was a different, less sympathetic teacher. She shooed me away. I walked warily into the playground. I remember what happened next like one of those David Attenborough documentaries. Lions eyeing me from the bushes. I was the little gazelle. A red-haired lion named Keegan spotted me. Keegan was a big Irish kid. His name still makes me think: Bully.

Keegan came after me and I took off running. I remember his angry face and my bewilderment—I knew he wanted to hurt me, but I couldn’t fathom why? What had I done? I didn’t understand yet that it wasn’t what I did, but who I was, that was the problem. I was the sort of kid that bullies bully.

So I ran and I ran and I got tired and Keegan grabbed me and pushed me to ground and pinned me so I couldn’t move. I was face up and he was leaning over me. Nobody did a thing, not the kids (duh) and not the teachers, who probably didn’t notice the survival drama playing out by the swings.

I recall feeling a terrible helplessness. But he wasn’t my first bully. I’d been honing a defense mechanism for several years already. The same sensitivity that told me a kid had smelly sweaty hands also detected some internal conflict in Keegan. He didn’t know what to do next.

In this second I asked myself, how am I going to get out of this? How am I going to survive? And then, some synapses fired and the answer bubbled up and I blurted it out. I looked at Keegan, and smiled, and said “Is there some way we could kiss?”

He looked at me with total incomprehension, and a hint of disgust, like: What?! Gross! He gave me one hard push into the dirt and then got up and left.

That, my friends, was my first joke.

Even as a six year old I knew it was not cool. I knew it was not cool to pretend to be girl in order to escape a bully. But, to my adult astonishment, the six-year-old me intuited that the joke would work. That it would baffle, confuse, and short circuit the bully. As an adult, I think, damn, that was a pretty sophisticated joke: Gender bending, ironic, totally unexpected. And as a survival mechanism, effective. Like the bird that pretends to have a broken wing so predators lose interest, or those lizards that make a silly face and run across water. Survival of the wittiest.

I have never told anyone about that story, or the words of my very first joke. Six-year-old me was deeply ashamed of the whole affair and sought to bury it. I did, however, pour massive amounts of energy and thought into this new defense mechanism, until I was the class clown, until I was the funniest guy at the party, until I was head writer of a sketch comedy group.

I never allowed another bully to get that close to me. I fended them off with jokes, sarcasm, I manipulated others to protect me, I did was what was necessary. But pretty soon the defense system was permanently on, at home, at grandma’s house, at work, on dates.

By my mid 20s I was a very funny, very lonely, and very unhappy person. I didn’t understand why I could command a house party with a well aimed joke but then nobody would want to hang out afterwards, no girl would respond to my text messages. 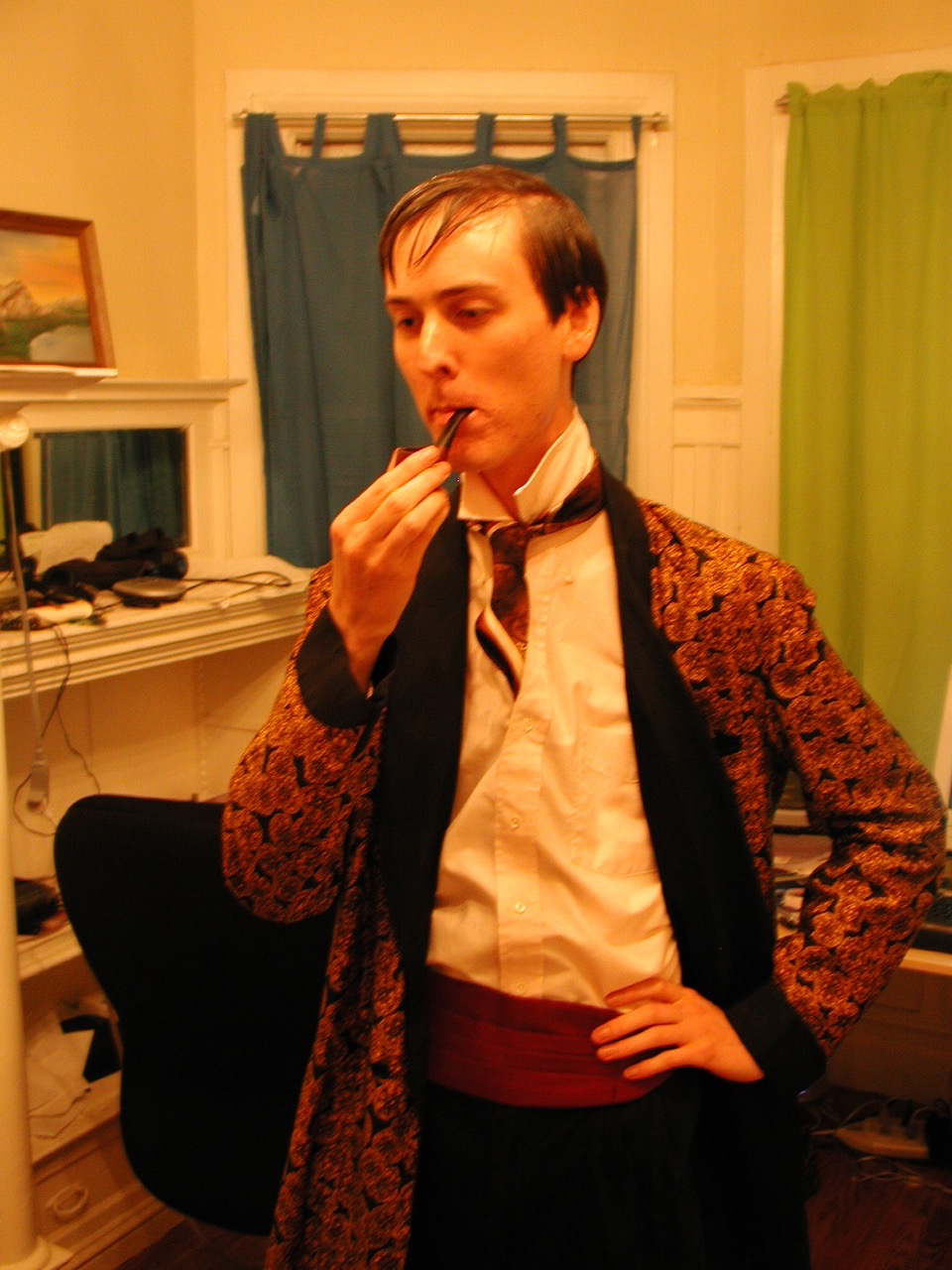 I recall my very sweet grandmother, then in her 80s, asking me how I was doing, and I responded with a string of obtuse jokes, well over her head. Ha-ha, lookit me go! She said, “Evan, I can’t understand you when you’re joking all the time.”

Or I look at love letters I wrote to girls I knew, long elaborate emails. I sent one girl a mock contract with terms for dating me. I sent another girl a slew of messages in Victorian English. I created a fake corporate website, established 10 dummy email accounts, and began messaging girls from my “Social Resources Department” (Legal Dept cc’d). Funny, right?

I was about 25 when I realized…Oh. I don’t have friends because nobody knows who I am. They just know the performer, the raconteur, the guy with the David Attenborough impression. Nobody knows who I am and so nobody can be close to me. My defense system had turned into this 360-degree shield that kept me in and everybody else out.

Charles Eisenstein talks about how sometimes attention alone can begin to alleviate a problem. And once I began noticing how I was pushing people away, I slowly started dismantling the shield. There was an awkward year or two in my later 20s where I stopped talking. Friends would meet me at a bar and, after enduring my reticence for an awkward minute or two, they’d talk and talk. Eventually I came to what I think is a reasonable balance of me talk, you talk.

I’ve also greatly restrained my impulse to be funny, to entertain. Most recently I’ve learned there’s this thing called listening and being present, which you can do when you’re not putting on a show.

I have been inspired by the comedians who have begun talking about the dark side of humor. About how humor often originates in childhood trauma. Comedian Neal Brennan estimates that 80% of professional comedy writers have depression. Comedian Hannah Gadsby talks about how humor can be a form of public self flagellation—“Do you think there’s a way we could kiss?”…Or even that laughter is a relief response, and so requires a kind of trauma as the setup. That most jokes are tiny little traumas, neatly packaged.

Comedians, it turns out, are experts on depression, anxiety, and addiction. The whole sad clown archetype turns out to be true. I’m happy that they’re speaking out at long last. Someone needs to.

If you’re curious about these matters I’d suggest the podcast The Hilarious World of Depression (see Neal Brennan’s episode.) Or watch Hannah Gadsby’s Nanette or Neal Brennan’s Three Mics on Netflix. Brene Brown has also written volumes on how we armor up in the face of unbearable vulnerability. Daring Greatly and her other books are great resources on the intersection of vulnerability, depression, anxiety, and addiction.

UPDATE: Almost immediately after posting this story I began regretting so many things about it. The wording, the tone. Is it too “victimy?” Too confessional? Why did I post it at all?

I must say, in writing it, I was caught up in the pain of the memory (now 30 years distant). As a man in my 30s I still remember feeling powerless and afraid in 1988. And part of the story is that I have carried those feelings to adulthood.

But I what I want to focus on with this is the grayness of trauma. I’m not sure we can accurately say trauma is solely a bad thing. Maybe trauma just is, like a tornado, or winter. Certainly we all experience it. It is inescapable. There is no perfect childhood or perfect life.

I’m interested in how trauma shapes us for good and bad. Yes I was bullied. Yes I carried a fear of other people into adulthood. I connect this to some very destructive beliefs and behaviors that have caused suffering in my life.

But I also developed a highly attuned sense of empathy, a weaponized sense of humor, a reflexive compassion for underdogs. In recent years I have been cultivating nonjudgment. I have curiosity about how bullies are made (as surely Keegan was) and how we can not make them in the first place.

My friend Rusty Blazenhoff posted this comment about the story. I believe she gets to the heart of the matter: “Thanks for sharing your thoughts on how childhood trauma can manifest into beautiful “gifts.”‘

I should also say that I have been a bully, I have hurt others, I have felt hatred and anger.

These stories are complex, there are no good guys or bad guys. Discuss.